Hey Guys, so we have completed with C Programming series, and in this module, we are going to discuss the Top 25 C Programming Interview Questions, what are the main and important questions that are frequently asked in interviews. 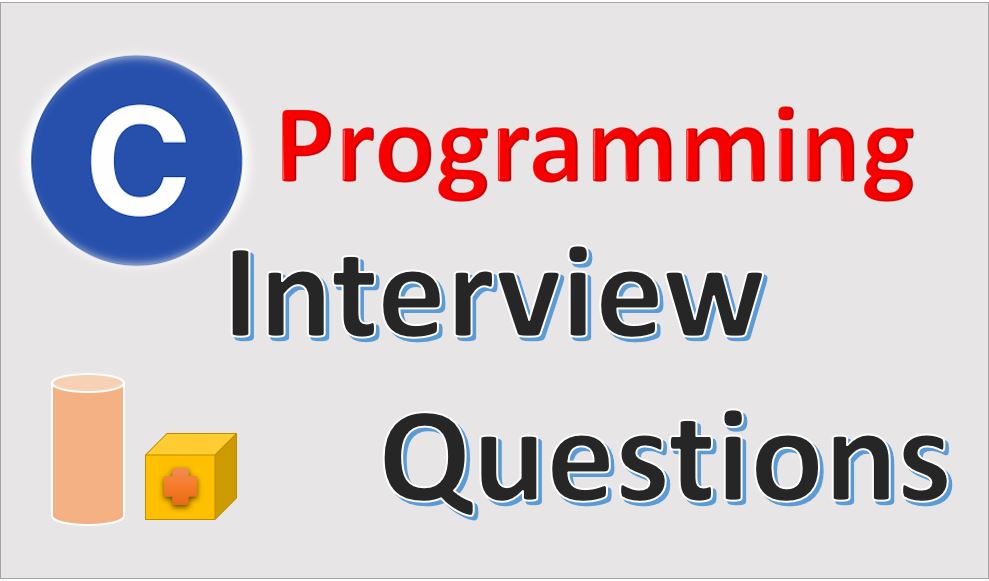 So, here is the list of questions with answers that are frequently asked in interviews.

Why is the C language called “the origin/mother of all other languages”?

It is the oldest language that came into existence as it creates the base of the programming world, many of the modern programming languages is being evolved from C only. It has a wide number of applications as it is widely used to design compilers and kernels.

Why main( ) function is used in C?

It is the main part from where the execution of our program starts, as the entry section of every program. It is very important to include the main( ) function in every c program, then only the program execution takes place. It is not like the common function which has to be executed for some purpose.

Explain the difference between variable and constant in C?

These both are used for constructing or designing a program in C. However, the common difference in both is we can alter or change the values of variables assigned at any time in our program as per requirements whereas we can’t do this with constants declared, the value of constants is the same as declared throughout the program.

What do you mean by Pre-processor?

It is considered as a separate step in the compilation process, i.e., our written code is first translated using a pre-processor, and then it is sent for the compilation. It acts as the directives which give the instructions to the compiler.

Explain the use of the header file in C?

The header file is the most important thing to include while writing our program in C, it contains a lot of pre-defined functions that are to be used in our program like for example the printf( ) and scanf( ) functions can be used under the <stdio.h> header file.

What are reserved keywords in C?

By the name only we can understand that these have the special meaning in C, and are reserved for something special and can be used for that only. There is a total of 32 reserved keywords available in C.

What is the difference between a variable that is declared as local or global?

It is called a NULL character, which is used for indicating the end of the strings.

Explain the difference between the “equal to =” and “double equal to ==” operator?

What do you understand by nested loop?

The loop inside another loop is called a nested loop, it is mainly used when working with multi-dimensional concepts.

What is the use of curly braces { } in the program?

It is mainly used to tell the scope of the particular function i.e., used for grouping the lines of code in one function. It is good practice to use curly braces as it makes our code looks good.

It is an error in the source code of our program. As we all know that C programming language is a case-sensitive language, so all the syntax should be written carefully. It may be any command that was misspelled or written in the wrong way.

What do you understand by the “void” keyword when used in any function?

Debugging simply means o find errors, like upon compilation, the compiler stops compiling the code where the error has been encountered, so now it’s the programmer’s duty to find that error in the code, this can be achieved by debugging.

What are NULL pointers in C?

If we don’t know the exact position to be assigned at the time of pointer declaration, then it is simply pointed to a NULL value, i.e., 0, and this pointer is then called a NULL pointer.

When the memory is created in the Heap data structure and the programmer forgets to delete that memory after use, then it slows the efficiency of the program and creates the leakage of memory.

What do you mean by dangling pointers in C?

What do you mean by auto keyword in C?

What is token in C?

A token is simply called an identifier. It is classified as the smallest unit of the program. It can be anything like constant, keyword, strings, etc.

What do you understand by infinite loop?

When the loop body is executed continuously without taking a break, then it is said to be an infinite loop, it can simply be achieved by for (; ;), while (1), etc.

Explain the role of the structure types in C Programming?

The structure is used to store values of different data types under one name and is easy to access. It is mainly used to maintain the records.

“w+” mode means that the file is opened for both readings and for writing purposes also if the file does not exist it will create the file and if the file exists, the content will be overridden.

For what purpose a double hash “##” operators are used in C?

This Operator is basically used to concatenate 2 tokens into one and is also called a preprocessor macro in C.

Explain the use of “#define” in C?

It is a pre-processor directive that is mainly used to define a constant value in our program.

I hope this module was really very helpful to you all, it consists of all the important and frequently asked questions in Interviews, for such more amazing modules, stay connected, until then, Happy coding, wish you all the best!