Welcome back guys, in this module, we are going to discuss what are pointers in C Programming, why do we need pointers, what are its advantages and disadvantages, its uses, etc.

So, let’s dive into this module.

What are Pointers in C Programming?

Pointers in C are used to store the address of a particular variable, instead of storing values. It becomes very easy to analyze the program while using pointers. It can easily handle the various task which can’t be executed using simple programming such as dynamic memory allocation. We can’t perform this without using a pointer. 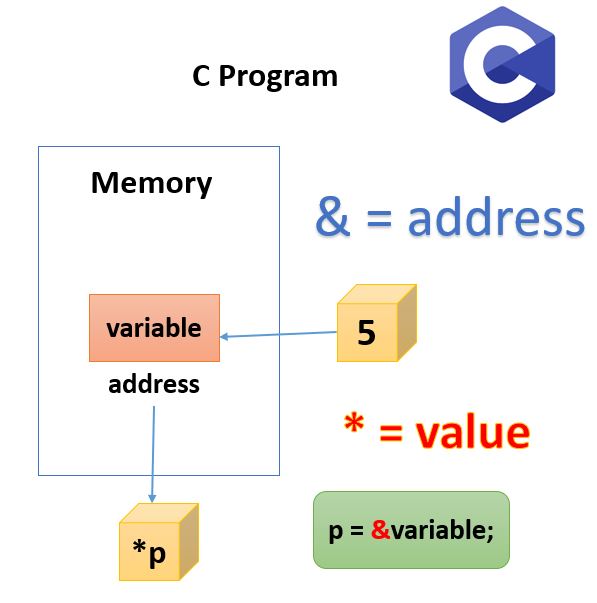 We know that each and every variable is a memory location and that memory location has its own address defined. So, we can access that address by using an ampersand (&) operator. This operator denotes the address in the memory.

Let’s understand this by taking a simple example.

In the above program, we have simply declared 2 variables of integer and character data type respectively, and then have accessed their addresses by using an ampersand operator and got the resultant output.

In simple terms, we can say that pointers are the variable, whose value signifies the address of another variable, i.e., you can assign the direct address of the memory location to some variable.

How to declare a pointer variable?

The general syntax of declaring the pointer in C is:
data_type *var_name ;

Some of the valid declarations of the pointer are:

How to assign the addresses to the pointers?

Let us understand this by taking an example.

In the above example, we have declared a pointer to integer variable p, and a normal variable c, in which we have assigned the value 5, and then assigned the address of the variable c to the pointer p. Let’s see the program to understand more clearly.

In the above program, we have declared a pointer, assign it to some value, and then printing the address of the variable and the value stored in that pointer variable.

What is a NULL pointer in C?

Consider this by the following program.

In the above program, we have assigned a NULL to the pointer variable and then got the value of the pointer to be 0 as output.

What are the advantages of pointers in C?

Let’s see some of the advantages of using pointers in C.

What are the disadvantages of pointers in C?

Well apart from having plenty of advantages, it has some disadvantages or drawbacks also. Let’s see some of them.

I hope, this module helped you all a lot in understanding this wonderful concept of C, and you all must be excited about the upcoming wonderful and exciting topics of this series.