Welcome guys, in this module we are going to discuss what is union in C Programming, its characteristics, its uses, its advantages and disadvantages, the difference between the structure and union, etc.
So, let’s begin with this module.

What is Union in C Programming? 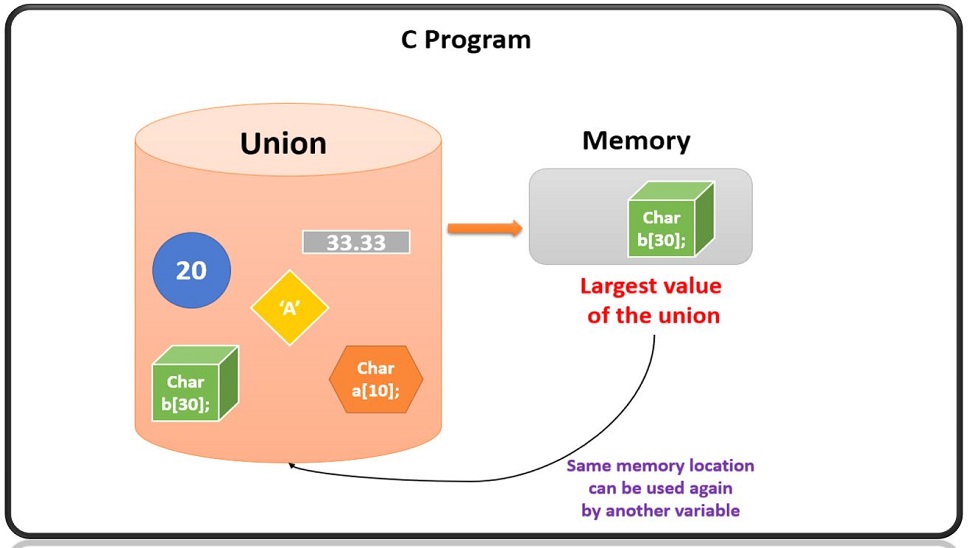 It is known for reusing the memory location in the best and efficient way as it accesses only one member at a time. It can be defined with many data members but only one data member can contain a value at a time.

How to define a union in C Programming?

The union can be defined in the same way as we declare the structure in C. Let sees one example to understand.

We have to use the union keyword to define union in C. In this example, we have defined a derived type union Person and given the two data members in the same.

How to create a Union variable?

Here is an example demonstrating the union variable.

Or the same can be defined as.

Accessing the members means using the data members of the union in our program and that we can achieve this by using a dot ( . ) operator. Let us understand it by taking an example.

In the above program, we have defined the union Person with two data members and then assigned the value to that data member using the dot operator and union variable, then printing the same value as output.

What are the differences between structure and union in C?

Since we know that there is a lot of similarity between structure and union, so let’s see some of the main differences between them both.

In the above program, we have defined union Person and the structure Person_new and have declared 3 data members in them, then printed the memory allocated by the union and structure both, so we can see that the union size is less than the structure size because the union has taken the space equal to the size of the larger data types of his member whereas structure has allocated the space for all his data members So, this program clearly depicts the memory allocation technique.

What are the advantages of using a union?

Some of the best reasons to use union is.

What are the disadvantages of using a union?

Let’s see some of the disadvantages of the union.

I hope, this module helped you all a lot in gaining knowledge about all the concepts included in the what is union in C Programming and must be excited to implement the same. Stay connected for such more modules, until then keep learning, happy coding!