Hey guys, welcome, in this module, we are going to discuss what are structures in c Programming, their uses, their importance and needs, the most important topic of this series.

So, let’s start with this wonderful concept.

What are Structures in C Programming? 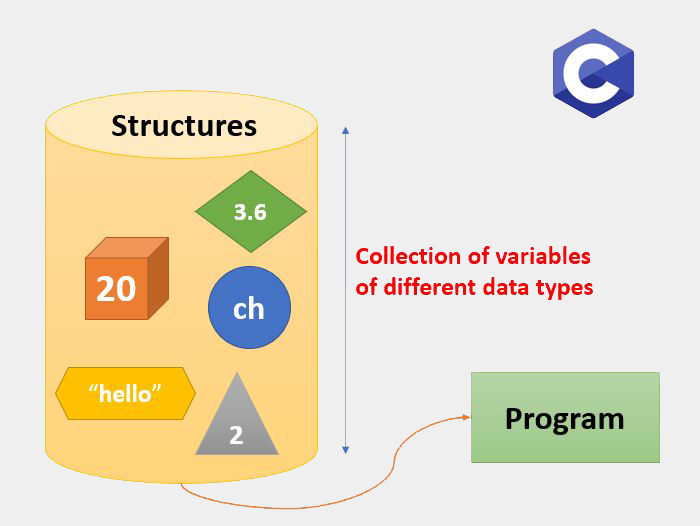 Let’s take an example to visualize the scenario.

Suppose, you want to store some information about a person like his/her name, mobile number, and salary. You can easily create different variables like name, mobNo, salary, of respective data types and then you can store this information separately.

However, in the future, you want to store information about multiple persons let’s say 100. Now, you need to create different variables for storing the details of each information per person. i.e., name1, mobNo1, salary1, name2, mobNo2, salary2… likewise, it will go on till 100.

You can easily visualize that the code will become big and messy which can divert our concentration. Also, there will be no relation between variables(information) that would exist.

Instead of this, we can go for another approach, i.e., all the information can be collected under the single name Person, and which we can access for each and every single person. This will make our code look cleaner, will be readable, and make it efficient as well and we know that the collection of all related information under a single name is called a structure, in this case, all the data are collected under the name Person.

How to declare a structure in C Programming?

Let’s see how to use structure i.e., how to declare the same while writing a program.

The struct keyword defines a structure type followed by an identifier (name of the structure that can be anything as per requirement). Then, you can declare one or more members or functions as per your requirements (i.e., declare variables inside curly braces) inside the curly braces of that structure.

Let’s understand this with an example.

In the above example, we have declared a structure named Person with the struct keyword, and have defined 3 members inside it i.e., name, age, and salary of char, int, and float data type respectively.

What are the key points to remember while working with structures?

There are some key points which the programmer should keep in mind while working with structures in order to avoid errors.

How to define a Structure variable in C Programming?

Now since we have declared a structure, we have to declare a structure variable also, so that we can access the member of the structure.

We have declared a structure Person above in this module, now we are defining the structure variable for the same as:

In this manner, we can access the members of the structure and can assign a particular value to it.

Let’s see one example to understand the concept clearer.

I hope, you all enjoyed this module and got to learn many new and exciting concepts. So, guys, I recommend you to keep practicing the program, and do some modifications alterations.

Until they, stay connected for such more exciting modules. Keep learning, Happy coding!