Welcome Folks, in this module we are going to discuss the Variables and Constants in C Programming, Cheers to all of you for making up till here, we are yet to climb more stairs, till now we have seen the basic structure of C Programming and also about the input-output function, in this we will see the one step higher.

So, are you all ready, let’s dive into the depth of this lecture.

Variables and Constants in C Programming 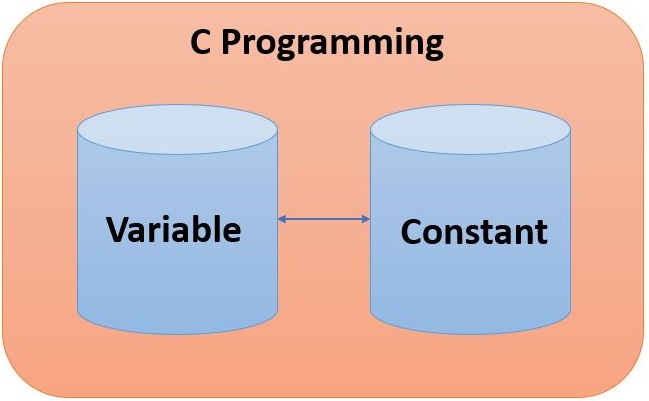 In C Programming, variables are like a storage area or we can say it is like a container that is used to store data and that data can be changed also depending upon the requirement. Here the container means in which you store some materials in daily life. For example, you drink water and that water is stored in the water bottle, so here water is the data, and the water bottles are the container.

Similarly, in programming data is stored in a variable, the constant is nothing but the type of variable only but you can’t change the value of that variable declared as constants throughout the whole program.

Till now, we have written a code that only gives the simple sentence written on the screen. However, Programming is not limited to here only, we can also write code that performs some useful tasks.

A variable is nothing but a name given to a storage area or container that our programs use to store the values and also can manipulate whenever required.

There are some rules for declaring the variable i.e., the name of a variable can contain the letters, digits, and the underscore character. It must begin with either an underscore or with some letter. Upper and lowercase letters are considered as different letters because C is case-sensitive.

A variable is a name, in which some value is assigned and that can be changed. For example, int num= 2; here in this example the variable name is num, which is associated with the value 2, int is a data type which represents that this variable can hold the integer values. We will cover the data types in the next module.

The syntax for declaring a variable is: Data_type variable_name = value;

In the above syntax you all can notice the Data_type, so don’t worry about that we will cover this topic in the upcoming module, it simply talks about what type or kind of value you are going to store in the variable like integer type, decimal type, etc.

Let’s see an example to get a clearer idea.

Constants are something that is used for representing a fixed value. It is also called Literals. It is used to depict a particular value throughout the program.

The constants can be defined in 2 ways:

By using the const keyword

Here, PI is the variable name that is assigned with the value 3.14, and also the const keyword has been used, so the value of the variable PI has become constant throughout the program.

By using the #define pre-processor

Here, we have used a preprocessor directive to define the constant. It is declared outside of the main function with the header files.

Difference between the Variables and Constants

So, in this module we have covered a lot about the variables and constants in C Programming, hope you all liked it and learned a lot. Must be excited about the next module.