Welcome folks, in this module we are going to talk about what is a string in C Programming, how to declare them, how to initialize them, and what are the various strings function is commonly used.

So, let’s read this module in order to gain deeper knowledge.

What is a string in C Programming?

A string is the linear sequence of the collection of characters that is terminated by a null character i.e., ‘\0’. It is also said to be the array of characters. The string in C is considered as a single data irrespective of the number of white spaces it contains. 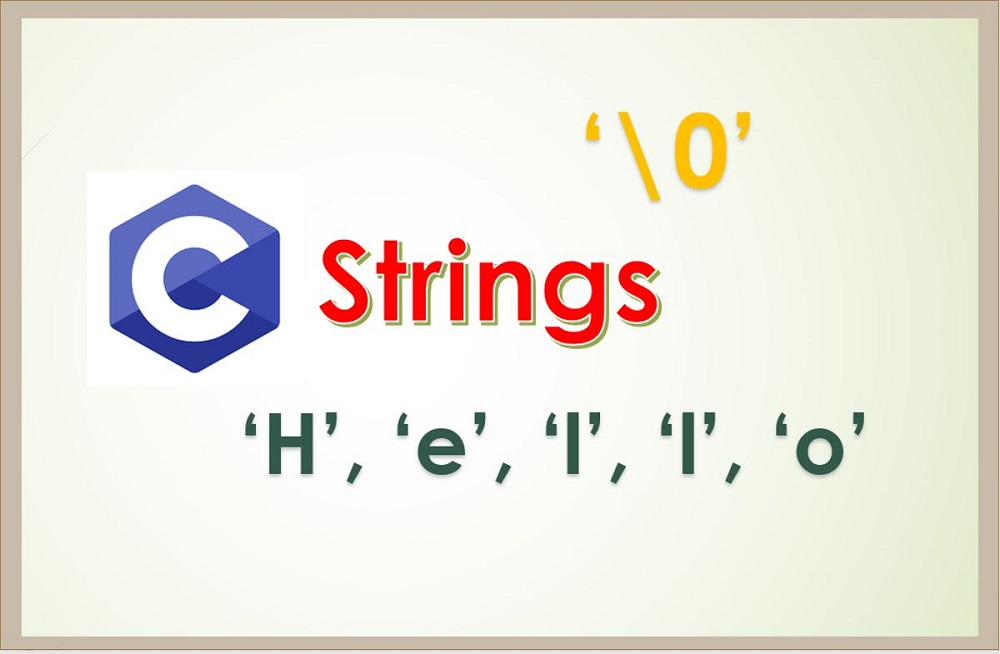 How to declare a string in C?

To declare a string, write the data type followed by the name and then size mentioned in square brackets like for example.
char test[6];
Here, we have declared the string named test of size 6.

How to initialize a String in C?

If the rule of array initialization is attained and followed, then the above statement can be resembled or written as follows:
char greet[ ] = “Hello”;

The memory representation of the above-declared string looks like this.

In the above example code, we have simply initialized the string named greet and then printed the same value.

How to take the input of the string from the user?

Users can simply enter the string with the help scanf( ) function, it takes the input until or unless it encounters the white space.
Let’s see one example.

In the above program, we have taken the input of the string from the user with the help of the scanf() function and then printed the same string as output in the screen.

How to read a full line or statement in C?

In order to read the full line in C, we have to use fgets( ) function for reading the input and puts( ) function to display the same output.
Let’s see one example program.

In the above program, we are reading a line or statement as input and then printing the same in the output screen. fgets( ) function is used for reading the line and in this one parameter is sizeof(name_person) which is 40 in this case that means you can’t enter more than 40 characters of line-in input.

What are all the functions supported by a string in C?

These are some of the strings function available in C with their purpose, that for which it is being used.
Let’s see one example computing some of the above-mentioned functions in C.

In this program, we have demonstrated the use of strcpy( ), strcat( ) and strlen( ) functions briefly.

I hope this module helped you all a lot and got the full knowledge about this wonderful concept of What is a string in C Programming. So keep learning, do practicing, and Happy coding!