Welcome back guys, in this module we are going to talk about what is function in C programming language in detail, how to declare functions, what is their uses, advantages, and disadvantages, and many more. Till now we have seen various interesting concepts in our previous modules.

So, let’s start with this important topic,

What is Function in C Programming Language?

Suppose, you are working on a large project, and in that, you have written 1000 lines of code and even more, there is some piece of line which are getting repeated again and again in the code, so this is creating ambiguity in the program and so avoid this ambiguity you can create functions, so that the lines of code which are getting repeated, again and again, you write that line of code in that function, and whenever you have to use that lines of code, you can simply call that particular function in place of that. This makes the code look beautiful and also more efficient. 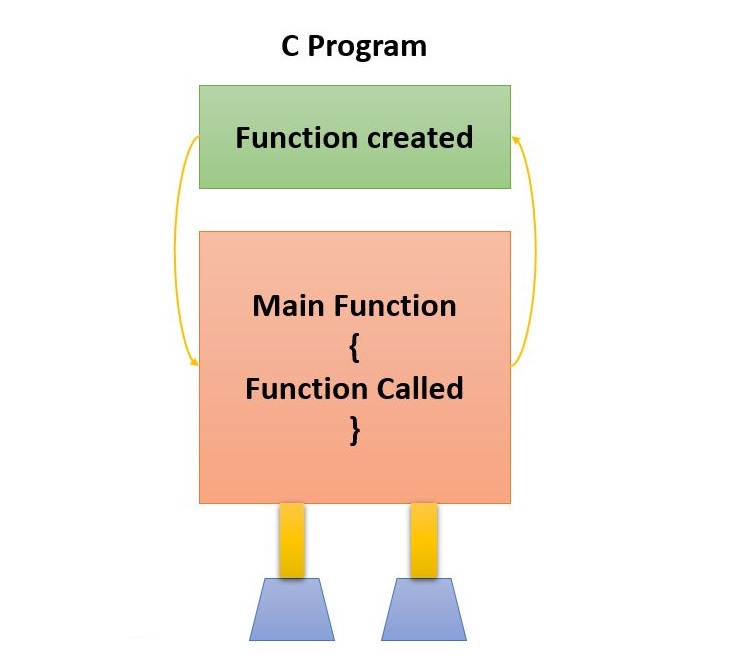 Therefore, the function is a block of code, which is being called in a program whenever needed. It gets only executed when it is called in the program. It is basically dividing up your code into smaller fragments called functions. The collection of functions constitutes a program.

Every C Program has at least one function i.e., main( ) function, from which the program body starts executing. Recall the same from our previous module, i.e., Hello World Program in C.

The function is of two types in C Programming and that is:

These functions are also called library functions, i.e., they are present in the c library, we can just import the necessary header file to use the same. These functions have particular characteristics and can use to perform useful tasks. Such functions are scanf( ), printf( ), pow( ), sqrt( ), etc.

These are the functions that are created by the user for their own uses in a particular program. So that user can use that function multiple times as per the requirement. It helps in reducing the complexity of the code and also makes it more efficient.

What are the aspects of the functions?

There are three aspects of functions in C Programming.

How to create a function in C?

Now for using a function in the program, it must be created first, the syntax for creating a function in C writes the return type and then specify the name of the function (that can be anything), followed by the parenthesis () like,

Let’s see an example of creating a function in C.

Here in the above example, we have created a function named myfunction and the return type of this function is void as the function is not returning any value. This function contains no parameters.

How to call a function in C?

In the above program, we have created the function first-named myfunction which is simply printing Hello world! and then in the main function, we have called that function and got the desired output.

Some key points to be noted are:

Let’s see one more sample example to get the concept clearer.

In the above program, we have created the function named add, it has taken two parameters, to add two values and then printed the result and we have called that function inside the main function with the arguments, Hence, got the desired result.

What are the advantages of using functions?

We have talked a lot about functions, let’s see some of the advantages of it.

So, I hope you all have now become familiar with this particular topic, it’s the most important topic of this series, used for building large programs in an efficient manner. Hope you all must enjoy the module.