Welcome Guys, in this module, we are going to talk about What are the advantages and disadvantages of Python? We have learned a lot about python in our previous modules like we have seen Future of Python, applications of python, and many more. So, now let’s focus on this module and explore a lot more about the same.

Advantages and Disadvantages of Python

Python, one of the most leading programming languages in today’s era. It has shown continuous growth in many industries and organizations over the past few years. Almost everywhere there is a python. That from building a small application like game development or app development to building Machine Learning and Artificial Intelligence models, exploring data analysis, data visualizations, and many more. 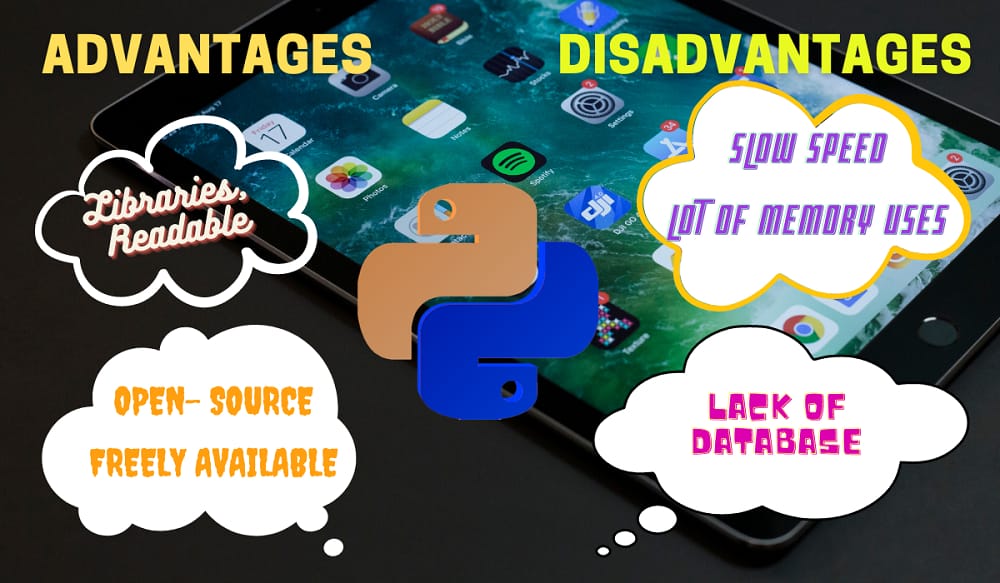 Apart from all these things there are a lot of advantages and disadvantages also, so let’s focus on that.

What are the advantages of Python?

Let’s see how python is dominating over other programming languages. So, here some of the advantages of python are listed.

Python is available for everyone

Anyone can easily learn and understand Python even if they are new in the programming world. The main thing is that it can easily run in any type of Operating system whether it be Windows, Mac, or Linux.

Once you have learned python you are ready for any type of job, like web developer, APP developer, Game developer, data analyst, machine learning developer, and many more.

It has a large collection of libraries

Python has a large number of libraries available and that’s the reason it can do any type of work in any field. Different libraries and used for different work, all are unique on their own. This is the reason it is getting famous in today’s industry.

You can easily do any task by just writing a few lines of code when compared with another language. It has extensive library support which has its own inbuilt functions that do all the work in just one line. This is also the reason that it is known as a beginner’s friendly language.

You can easily read the code written in python just like you read the English language and also it is understandable. The proper indentation of the python makes the code looks good and clear through which it is easily readable.

It is a Portable language

Python provides more portability when compared to other languages, i.e., it can run on any platform and that’s why is it also called Write Once and Run Anywhere whereas if you have code in another language and after that, you are changing your platform or machine to run that code, then there may be some chances that you have to make some type of changes in the code, but it is not so in python.

It is free and open-source

Python is freely available on the internet, you can download the software freely and not only software but you can easily get the source code also. The software in which you can code in python is Jupyter Notebook, Spider, and many more.

By learning Python, you have multiple opportunities open for you then you can go anywhere that suits you like you will be ready for pursuing your career forward in data science, machine learning, APP development, Web development, and many more.

What are the disadvantages of Python?

We have covered a lot of positive sides of python and have seen the advantages, applications, and many more, but apart from all this, it has some negative sides also, so, let’s see some of the disadvantages of Python.

Python results in slow execution, though it is interpreted. It executes the code line by line and follows the top to bottom approach for execution.

Though Python is easy and simple to learn, when it comes to interacting with the database, Python lacks behind this. Most organizations want a smooth database so that there should not be any error, but python can’t give this.

Uses a lot of memory

Python is not efficient for memory. It consumes a lot of memory. So, it becomes inefficient when you have to build a project with respect to memory optimization.

Weak in Browser and mobile computing

These are some of the advantages and disadvantages of Python Programming.

I hope this module was very interesting and you all liked it a lot and got a clear picture of what Python is in today’s industry. So, for more modules in python, stay connected with us. Until then, keep learning, keep reading, stay happy.