Use My Notes
Home Python for Beginners Future of Python

Welcome back guys, in this module, we are going to discuss the Future of Python, i.e., how python is booming today’s industry, and how the same or more industries can be impacted by python. So, let’s dive into the depth of this amazing module.

Since Python has become the most used modern programming language in today’s arena. It has been dominated in all other programming languages like C, C++, Java, and many more. Since, the day it comes into role i.e., the early nineties, from that very day till now, it has made its growth continuously. So, what is making python more popular, is it going to be in the same trend in the future also. 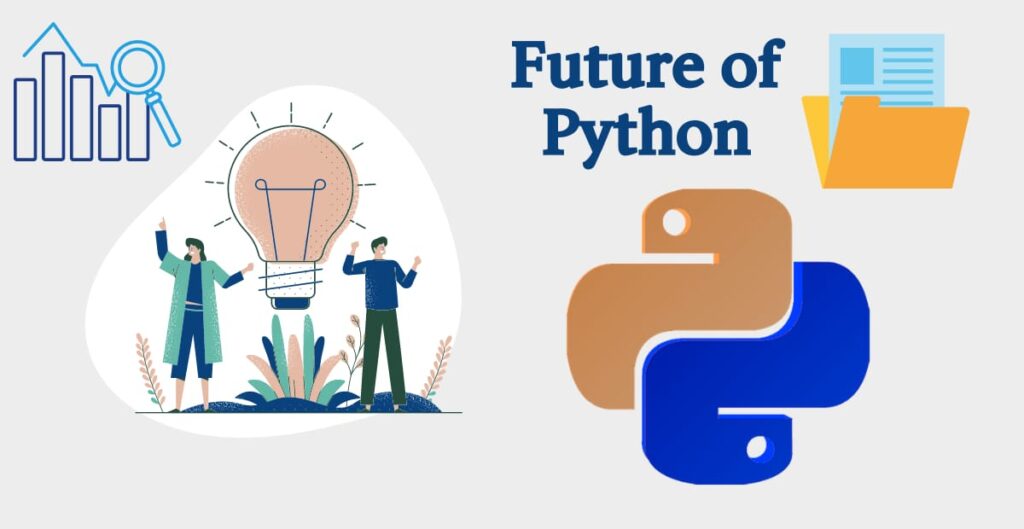 Let’s focus on some of the key points about the popularity of python.

Python is a very easy language; it can easily be chosen as the first language by each and every person who wants to land in the programming world.

The most important part of python is that it is open-source, i.e., freely available on the internet and anyone from anywhere in the world can use that code and make changes or modify that accordingly as per the requirement.

Python is a very versatile language, i.e., in almost everything we can work with python, developers, and making or developing many packages for everything, like it is mostly used in data science, web development, and many more. Some of the frequently used libraries are NumPy for working with numerical i.e., numbers, pandas for working with data sets, scikit-learn for working with various machine learning algorithms.

The best part of python is that it can be easily used with any type of operating system whether it be Windows, Linux or Mac, etc. This means that you don’t have to use different code for working with the different operating system, the code written in windows can be used in the Linux platforms also. In simple words, python doesn’t need the support of our system.

The ability of python, the way it controls the process, the integration of various processes, its various framework, these all things or we can say all these capabilities of python lead to increase its speed and productivity. Multi-protocol network applications, most applications can be built by using python.

It is a very simple language, which comes with very advanced features that can easily overcome all the common programming tasks.

There are many programmers who are working in python only and coming up with various solutions for a variety of problems and this creates a strong community of smart developers.

What are the benefits of Python?

Since, we know why python is popular, so in the same way because of its popularity and features it is giving an advantage to a lot of companies using python, Let’s see some of the benefits of using python.

Python can be used for creating websites as per your requirement very easily.

Many Apps are being created with the help of python only nowadays and are deployed in the play store.

Many responsive GUI applications are created with the help of python by using the Tkinter library.

The most important field in which python is booming the developers and creating a lot of competition in the market. Python is widely used for data analysis, data visualization, data exploration. As we know, there is a huge amount of data is generated every single day by almost all the companies, and so to handle that data, python is used.

Python is used to build a Machine Learning model, which is used for making predictions. Healthcare, e-commerce, tech companies, almost all sectors are using the machine learning technique.

So, these are some of the benefits of python that why python is widely used, this is what python is in the current scenario, and also because of its amazing features and characteristics, it will continue to boom in the future also.

There are many programming languages, and python is on top of all that, it is usually the favorite language of all the programmers among all other available languages. Python is developing at a huge rate and is able to develop many of the applications which have been used in real-time, and the most important thing is Machine learning and Data Science and taking up the IT sector and working with these, python is used. So, we can easily assume that Python is even coming in the future decade, The only thing it can do, it can expand, i.e., maybe get involved with AI development.

I hope this module was very exciting, and you all must think to start learning or building your career in python. So, you are all in the right place, stay connected with us, for such more modules. Until then, Stay healthy, keep learning!