Use My Notes
Home Python for Beginners What are the features of Python?

What are the features of Python? 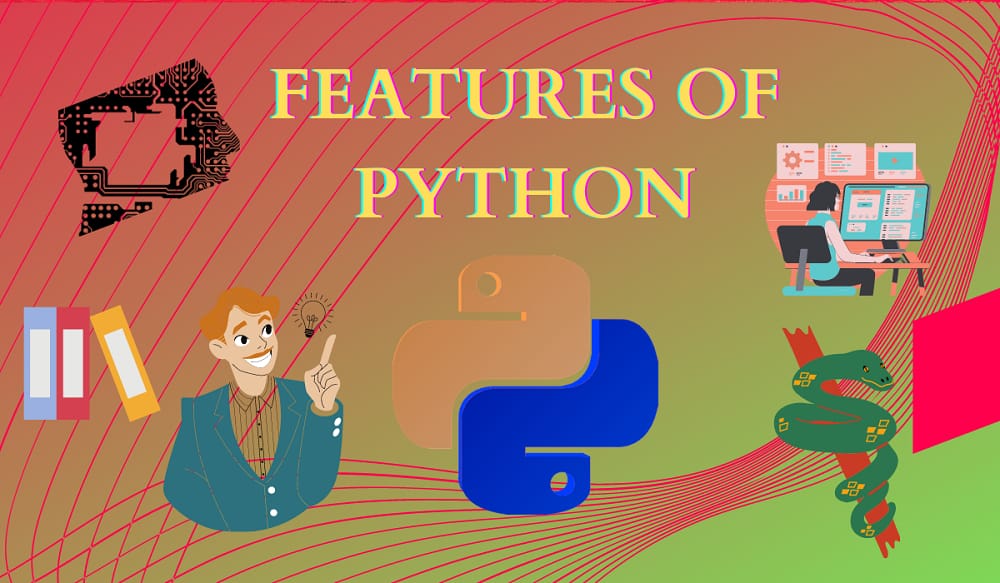 Simple to Learn and Easy to Code

Python is a beginner-friendly language and also a developer-friendly language. So, anyone who doesn’t know anything about programming can also start learning Python. It is very easy as compared to other object-oriented languages like C, C++, and Java. Everyone can learn easily and start coding in just a couple of days. The syntax of Python is very straightforward, the indentation is there which defines the scope of the particular code blocks, no curly braces and semicolon is used.

Python can execute more and more complex code by just writing a few lines of code. All types of programs can be built in an easy manner in python. Suppose for printing welcome on the screen, we can simply write print(“Welcome”), whereas if you write the same code in another language like C, C++, or java it will take multiple lines.

Its free and Open Source

Python is available for free over the internet, one can download it easily from the official website of python and i.e., www.python.org. It is also open-source since it was developed under an OSI approved open-source license, i.e., the source code is available on the internet, and one can easily download it, execute it, modify it and then distribute it, and this is because it is called Free/Libre and Open-Source Software (FLOSS). Anyone from anywhere in the world can contribute to the python community. All the developers involved in the python community have thee one goal only and i.e., Bettering the python community.

Python programming is an integrated language by nature which means that the code of python is executed line by line which makes it easy to debug the code. The code written in python can be easily integrated with other programming languages like C, C++, and Java, etc.

Python has a large number of libraries available which have their own unique work in various fields like, web development, game development, machine learning, data science, scripting, and many more. Some of the machine learning libraries are NumPy, Keras, TensorFlow, Pandas, Matplotlib, Sci-kit learn, and many more. Flasks, Pyramids, and Django are some of the amazing frameworks available in python for web development. Thus Python has a lot of applications.

There are other libraries also available and used for unit testing, web browsers, threading, image manipulation, regular expressions, and a lot of other functionality.

Desktop Applications are developed using the Graphical user interface and python provides various tools to make GUI-based applications. This is the key aspect of the programming language to support GUI. GUI allows the user to easily attract to the software because the software is not user-friendly until GUI is made. Some of the python libraries that allow you to make GUI are Tkinter, PyQT5, Kivy, wxPython, and JPython.

Python is a portable language, which means you have written a code, and that code can be easily executed in any of the other machines whether it be Windows, MAC, Linux, etc. Without modifying the code, the same code can run easily on any OS. Other programming languages do not support this feature. Through this feature, one doesn’t need to write the same code multiple times for different machines or systems.

Python supports both the approaches of the object-oriented language i.e., it supports the concepts of classes and objects. It supports polymorphism, encapsulation, and the abstraction technique. This feature helps the developers and the programmers to write reusable code and useless code for developing applications. On the other hand, it also supports procedural oriented, in this the more focus is on functions (i.e., the code can be reused).

I hope you all gained a lot of knowledge about python from this module and also came to know why python is ruling in the industry and the future of python. It has become the most used programming language by developers. For much more amazing modules and exciting concepts, stay connected with us. Until then, stay happy, Keep learning.