Use My Notes
Home Java Programming Packages in Java

Hey everyone, in this tutorial, we will learn packages in Java. Packages are the packaged form of java entities that include classes, interfaces, etc. We will deep dive into understanding packages and learn to implement them in Java. 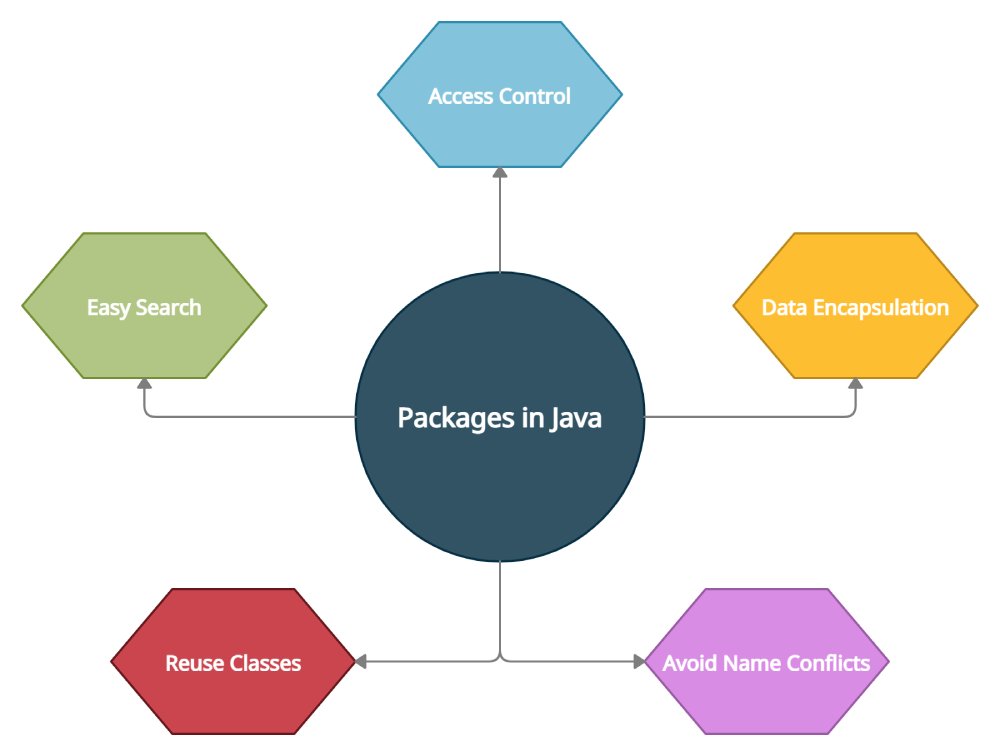 Sub packages: Packages that reside in another package are called sub-packages. They are not imported by default and must be imported manually if needed. No access specification is given to individual members of a sub-package and also they are considered as a different package.

Some existing Java packages are:

Why do we need packages?

How to create a package in Java?

Let’s create a package named computer. Generally, the name of a package is spelled with lowercase letters. This is only to avoid name clashes with class names. We will create an interface named Pluggable that will reside within the computer package.

We will now create a class named PenDrive that will implement the above interface.

How to create a hierarchy of packages in Java?

In Java, packages are named in reverse order to form the package hierarchy. Packages are very similar to directories or folders. We can consider any directory in a personal computer that holds one or more sub-folders; these actually form a hierarchy that is similar to the Java hierarchy of a package.

Consider a package named Asia.India.Kolkata, then these are the folders that exist i.e, Asia, India and Kolkata such that Kolkata is present in India and India is present in Asia. The main motive is to make classes easy to locate.

Types of packages in Java

These are the packages that consist of a large number of built-in classes that are a part of the Java API. Commonly used built-in packages are:

Packages that are defined by the user are known as User-defined packages. A user can manually create a package and have as many classes in them as he wants.

Accessing a package from another package can be done in 3 simple ways:

Size of a default package in Java

By default, Java imports java.lang package. It has many classes that are generally used in a simple Java program such as String, Integer, etc. One of the most important classes is the Object class which in turn is also in java.lang package. The size of this package is based on its constituent’s i.e, 8 Interfaces, 37 classes, 3 enums, 27 exceptions, 23 types of errors and 5 types of annotations.