Use My Notes
Home Blog WhatsApp vs Signal vs Telegram

Hey folks, in this article we are going to talk about WhatsApp vs Signal vs Telegram, in recent days we have seen some of the new policies introduced by WhatsApp due to which many of its users are moving towards Signal and Telegram. So, let’s see the differences and what is better to use.

WhatsApp vs Signal vs Telegram

The new privacy policy has been updated by WhatsApp due to which it has encountered many of its users leaving this platform and going for the alternatives like Signal and Telegram. WhatsApp is owned by Facebook, and according to the new privacy policy, it is known that the user data can be accessed by many of the companies owning Facebook. 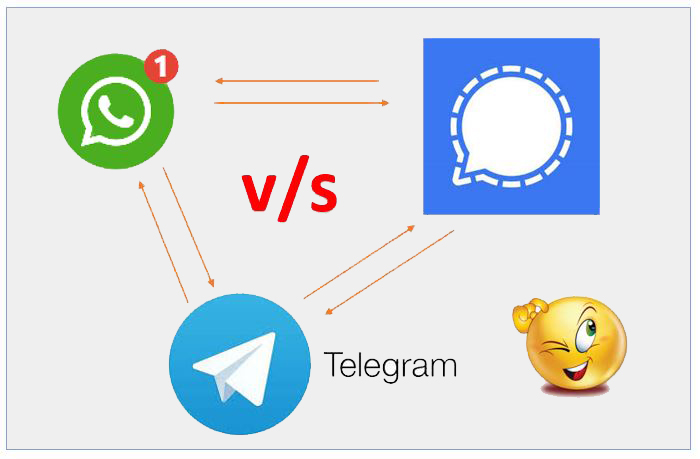 So, let’s compare the features of all three platforms in order to get the best possible.

It is the most popular and the largest platform considered for messaging all over the world with a monthly active user of 2 billion owned by Facebook. It came in 2009 and ruled the world of social media. It has replaced normal messaging and also was a good alternative to skype. It involves everything that one should need as a social media platform. It has an app payment feature. It has both voice and video call features supported by both individuals and groups of peoples. It supports a group video call of 8 peoples at a time.

Backups are not encrypted in WhatsApp whether it may be local or cloud.

The main advantage of using telegram is that it has unlimited server storage and also supports a group with a maximum size of 2,00,000 members. It has various types of channels very similar to groups in which the owner can decide who can send the messages into that channel. It supports multiple groups features that are very specific such as hashtags, quizzes, polls, bots, these are very extensive for large group’s experiences.

The group chats are not encrypted in a telegram, until or unless you use the Secret chats feature, but again it only supports single-user communication.

Recently, it becomes the latest member of the community because of its privacy concerned, it only takes a mobile number for registration. It is available for all types of platforms i..e, Android, iPhone, etc. It offers voice and video calls, secure messaging with the end to end encryption feature. You can create groups and also it has added the feature of the group video call. But you can’t broadcast messages to multiple contacts at a time.

Signal offers communication in the most secure form over the internet. But the major drawbacks are that signal lacks a lot of features when compared to Telegram and WhatsApp. All the group calls are encrypted by a signal. It also encrypts all the local files by default with a 4-digit passphrase.

What are all data collected by WhatsApp?

The following is the list of data collected by WhatsApp.

What are all data collected by Telegram?

The following is the list of data collected by Telegram.

What are all data collected by Signal?

Signal only stores the user phone number and none of the data is being collected by it. This is the biggest advantage of signal because of its privacy concerns.

I hope this article has helped you all a lot in knowing the exact features of all the three platforms (WhatsApp vs Signal vs Telegram) with their detailed information, for such more exciting articles, stay connected.