Hi everyone, welcome back. In this module, I will be discussing the 50+ most asked C Interview Questions and Answers. If you want to learn more about the C programming language, check out our C programming course. Let us now discuss it. 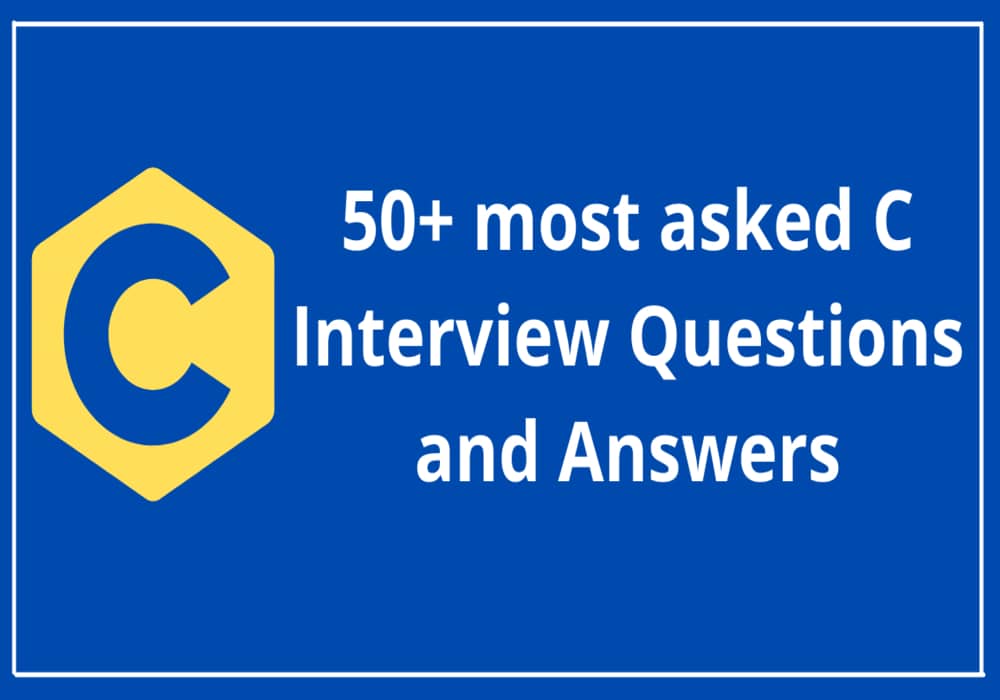 1. Distinguish between calloc() and malloc().

2. Distinguish between actual and formal parameters.

3. Can a C program be built or run without a main() function?

4. Why is C referred to as a mid-level programming language?

C is referred to as a mid-level programming language because it possesses characteristics of both low-level and high-level computer languages.

5. List some of the features that make up the ‘C’ programming language.

6. What are the functions printf() and scanf() in a C program for?

7. Define call by reference versus call by value in C language.

An array is a user-defined data type used to store a group of elements of the same type referenced under a single name.

A pointer is a variable that is used to store or hold the address of another variable of the same type.

A static variable in C is a variable whose lifetime is throughout the program i.e., it is destroyed after the complete execution of the program. Its default is 0. They are initialized only once.

12. What exactly is typecasting in C?

When changing one data type to another, this is called typecasting.

13. What do you understand about static memory allocation?

14. Name the functions that are used for dynamic memory allocation in the C language.

16. In C, write a program that swaps two variables without using a third variable to do so.

A structure is a user-defined data type that is used for storing the elements of multiple data types in a single unit. In C, a structure is defined using the struct keyword.

A union in C is a user-defined data type that allows various types of data to be stored in a single unit. The memory occupied by the union is the size of the largest member only which is shared by all other members of the union. In C, we define union using the union keyword.

21. In the C programming language, what does pointer to pointer mean?

A pointer to pointer, as its name indicates, is a variable that holds or includes the address of another pointer variable in its memory.
For example,

23. What happens if a header file is included twice in a C program?

If a header file is included twice in a C program, the second one is ignored.

24. Determine the difference between the header file enclosed in angular brackets and double quotes “”.

26. What do you understand by command line arguments in C?

The parameters given to the main() method of a C program from the command line during execution are known as command-line arguments.

27. In C, explain the differences between struct and union.

In the C programming language, typedef is a keyword that is used to define an alias or alternate name for an existing type.

29. In C, write a program that adds two integers without using the addition operator (+).

32. What do you understand by enum in C?

An enum is a user-defined data type in C created using the enum keyword. It makes the program more readable and understandable by assigning names to integer constants.
For example,

33. Is there a difference between the getch() and getche() functions in the C programming language?

34. Is it possible to make your header files?

Yes, we can make our header files in C, and by using #include directive we can make them included in our program.

Macros are code segments that are replaced by the macro value. It is defined by the #define directive.

36. In C, is it possible to take a variable number of arguments in a function?

37. What is dynamic memory allocation in C?

Dynamic memory allocation in C is defined as the allocation of memory at run time or during the execution of the program. Thus, memory size can be increased or decreased according to our requirements. We use calloc() and malloc() to allocate memory dynamically and free() to deallocate the allocated memory.

A wild pointer is a pointer that is not initialized with any value.
For example, int *ptr;

39. What do you know about far pointers and near pointers?

In a 16-bit computer, a near-pointer is used to store 16-bit addresses within the current segment. They can access 2^16 i.e., 64KB of a data segment.

40. How many types of phases are there in recursion?

There are 2 phases of recursion in C:

41. Is it possible to call main() function recursively?

Yes, we may recursively call the main() function.

42. Is there a limit to how long an identifier may be in C?

Yes, the maximum length of identifier can be upto 31 characters.

43. What is the purpose of the pointer in the C programming language?

44. What do you understand by the scope of a variable in a C program?

The scope of a variable is defined as a section or region of the program where a variable can be easily accessed.

45. Mention some of the differences between C++ and C.

46. What is a self-referential structure in C?

A self-referential structure in C is a structure having one or more pointers as a member pointing or referring to the structure of the same type. It is used in creating data structures such as linked lists, trees, and graphs.

A static function in C is a function defined using the static keyword in C. It is created when we want to restrict the use of a function within a file where it is declared.

48. How do variable declaration and definition differ from one other?

When a variable is declared, it informs the compiler of its data type and size, but when you define a variable in your code, it allocates memory to the variable.

49. Write a program in C to print backslash (\) characters.

52. Is there any error in the following C program?

No, there will be no error in the given program because the comma (,) operator is used for separating two or more expressions or variables. Hence, the output will be “Hello, World!”.

54. Is it possible to do nested comments in C?

No, we cannot do this.

55. What are the various modes of file in C?

56. What is the purpose of using the realloc() function in C?

realloc() function is used for resizing the memory block that is allocated dynamically.
Syntax

The first argument, ptr, is a pointer pointing to the memory block allocated using either malloc() or calloc() and the second argument is the new size of a memory block.

58. Write a C program to print a string without double-quotes.

59. When using C, how can a negative integer be stored?

60. Write a program in C to print the fibonacci series.

I hope this module will be very beneficial for your interview preparation. Many other questions related to C are asked in the interview, but it cannot be discussed in a single article. For learning programming languages like C, Java you can study from our website, until then stay tuned with us for more informative and exciting modules like this.